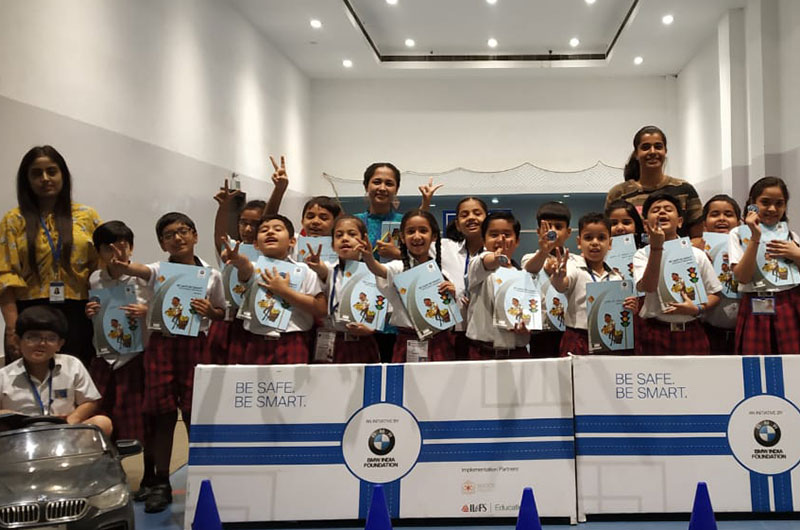 Road traffic continues to be a major developmental issue, a public health concern and a leading cause of death across the world. More than 1.35 million people perish in road accidents worldwide as stated in the Global Status report on Road Safety 2018. As much as 90% of these casualties took place in developing countries and 11% accounted to India alone. Around 1.5 lakh people are estimated to be killed in 4.67 lakh road crashes accounting for almost 53 accidents and 17 deaths almost every hour.

Against this background,‘Be Safe, Be Smart Road Safety’ programme, highlights a strong need for road safety education to school children from classes 1 to 3. An initiative for the young, it is being implemented by Schoolnet India Limited in collaboration with BMW India Foundation. The programme has been developed with the objective of empowering students with the knowledge, skills and attitude for being a responsible road user. It is an innovative combination of classroom demonstration through multimedia modules followed by a actual practice simulation on ground to give students an intimate and detailed understanding of road safety protocols.

Substance abuse, also referred to as drug abuse, is a contagion that is fast consuming the adolescents and youth in India. According to the “National Survey on Extent and Pattern of Substance Use in India” report released in 2019, about 14.6% of the population between 10 and 75 years of age uses alcohol. Cannabis and Opioids are the next commonly used substances in India. Sometimes volatile substances are also used by children that can easily be found in nearby stores such as glue, cough syrup, pain relief ointments. etc. With drug users beginning early at the age group of 18 to 35 years, the physical, psychological and cognitive damage caused by them are catastrophic not just to the individual but to the entire family and the nation. It is estimated that 50% of the children before they reach the ninth grade have atleast one of these substances. This is alarming.

Since most of these abuses begin in the childhood, what better opportunity can there be than to treat this in the early years of life. Department of Education in collaboration with Diageo and Pernod Ricard India Charitable foundation developed a game- based programme called ‘Cool Teens’ to raise awareness among students on substance abuse through a series of engaging digital games. Implemented by Schoolnet India Limited, the programme is implemented in the context of psycho-social problems faced by youngsters.

The core concept of the game is to handle peer pressure by saying ‘no’ to an exciting, yet misleading request. The game exhibits how a devil traps a person with questions, puzzles and riddles and the player must ensure that they stay away from the clutches of alcohol and substance abuse by adopting the right attitude, strategy and precautions. It was designed for the higher secondary students to sensitize them on psycho-social problems. The game is available in five different languages – English, Hindi, Marathi, Kannada and Telugu. Schoolnet India Limited has reached more than 1.75 lakh students in both private and government schools so far with this programme.